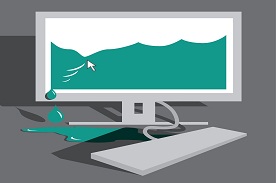 On September 5th, 2016 hackers calling themselves The Control (l) Group hacked into the official website of BDSwiss, a Cyprus-based Trading company with offices throughout Europe and stole a trove of highly sensitive data. A sample set was leaked publicly on a file sharing site. The group behind the hack set out to expose money laundering and alleged scams by BDSwiss. The Control (l) Group also left a brief message in German accusing the owner of BDSwiss of having strong ties with right-wing extremists. In the message, they also accused the owner of several murders. The Control (l) Group stole 75.4GB of data from BDSwiss servers. Folder list includes money laundering, reminders, personal passwords, and right-wing tourism, unsecure customer data, Contacts, Sexual content preference.

Avinash Gupta, a top BPO executive, had developed friendship with a woman residing in Park Street area two years ago. She too was an IT employee. A year ago, the woman married another man and moved to the US. Enraged, Gupta mailed intimate pictures with the woman to her husband. The woman then flew down to Kolkata and lodged a FIR, and he was arrested.

Cyber Security Tips: To prevent such blackmailing, make sure that the person is trustworthy while sharing any information, avoid sharing personal account details.